For us Americans, Christmas and New Years are the two great winter holidays. Full of bright lights, snowflakes, and stocking stuffers, this time of year brings out classic Hallmark moments. For a select few, winter also means spearfishing the wrecks of the North Carolina coastline.

The east coast of the US is a passive continental margin, sitting in the middle of the North American plate. Unlike New Zealand, where plates collide, the seabed slopes gently for miles as it stretches out to the continental shelf. With the notable exception of the limestone ledge complexes of Cape Hatteras and Cape Lookout, the offshore seabed is characterized by low topography and vast sand expanses. “The Graveyard of the Atlantic” is the name given to this treacherous part of the Eastern Seaboard. Over 2000 shipwrecks litter the North Carolina coast, providing a wealth of habitat in the midst of the sandy ocean desert.

Throughout the year, wrecks hold good numbers of gag grouper (Mycteroperca microlepis), the primary target species for hunters and fisherman alike. Summer months bring clear, warm waters from the Gulf Stream and a host of other reef and pelagic species. However, the summer influx of heavy fishing pressure and hungry sharks makes hunting the wrecks a real challenge. During winter, gag grouper gorge themselves on migrating baitfish in the cool, nutrient-rich waters and their slow metabolism and low guard allow spearos a better chance of landing a fish. With a good wetsuit, a reel gun, and a deep breath, underwater hunters can be successful at pulling winter gags out of the nooks and crannies of steel hulls. 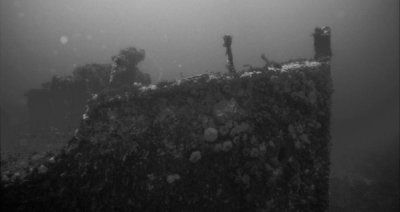 Did he just say reel gun? Yep, that’s the weapon of choice for the wrecks. Wrecks have lots of underwater obstacles and the hunting often forces you to turn corners and switch direction. Having a reel gun frees you up from any trouble with tangles and snags. On top of that, most fish you shoot here will seek refuge in the wreck, so there is a low probability that fish will take off for open water and spool you.

Hunting techniques are pretty straightforward. Once the fish are located – they will usually congregate on one side of the wreck – it’s a matter of diving down to a part of the wreck that will allow you to sneak in for the kill. As divers the world over know, fish can sense our presence long before we notice them, and it’s no exception here. It’s key to work off the natural curiosity of the grouper. That involves staying concealed around different parts of the deck and sides, giving the grouper a chance to pop out to investigate. Almost invariably, if you wait long enough, a grouper can’t stand sitting still for too long and will come out to see what you’re up to. That’s when you take the shot.

In this environment, making a good shot is essential. Kill shots are often achievable because of the slow pace of the hunt, but a shot in the head or gill plate will usually be successful. The trick is to stun the fish, which will allow you to get them away from the wreck as soon as possible. Flopper shafts are also preferred over slip-tips for this type of hunting because of the leverage they maintain. Gags will struggle to duck in secret holes with a large shaft protruding from their side. If a gag takes you into the wreck, the chance of tear-off is high, so the combination of a good shot, the right gear, and quick reaction will bring fish to the boat. 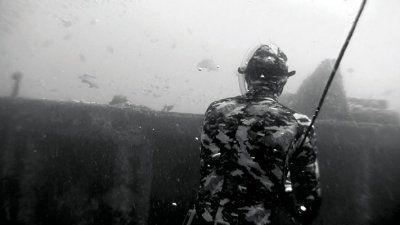 "THE GRAVEYARD OF THE ATLANTIC IS THE NAME GIVEN TO THIS TREACHEROUS PART OF THE EASTERN SEABOARD." OVER 2000 SHIPWRECKS LITTER THE NORTH CAROLINE COAST, PROVIDING A WEALTH OF HABITAT IN THE MIDST OF THE SANDY OCEAN DESSERT.

One of our favourite wrecks lies approximately 18 nautical miles offshore in 82 feet (25m) of water. The wreck is fully intact along its 440 foot (134m) length and rises over 30 feet (9m) off the sand at the highest point. The midship and rear deck feature large openings to the berth, while upper decks offer a great vantage point to pick off fish cruising below. At the beginning of most hunts, gags are found cruising the decks looking for a meal. First descents are usually rewarded with nice fish. Soon after, the grouper move into the bowels of the wreck and the real hunting begins, often culminating at the stern. This part of the ship is at 70’ and the large opening allows grouper an easy escape if they are pursued. The aspetto technique can be very rewarding here when wary gags move inside the wreck.

Our latest trip to this wreck was incredible. We bundled up in our warmest winter wear for the ride out on smooth seas. After the hoop and holler of putting on our suits in the cold, we hopped in. Loads of baitfish were around, so we were excited to see what was on the wreck. As expected, the vis was poor at about 20-25 feet (6-7.6m). Fortunately, this isn’t a disadvantage because it often allows you to intercept fish on the drop and to sneak in close. The first fish taken from the decks were average sized, around the10 pound (4.5kg) mark. Early in the dive, I was able to intercept a speedy school of false albacore, feeding on the hordes of baitfish. Gutted and gilled, this surprise catch was destined for sashimi.

The next fish to hit the boat was a pig of a grouper, stoned by Ashley Futral, and with a gun she made, no less. She was the only girl on the boat and also a Team USA competitor at this year’s World Freedive Championships in Egypt. Not only is she an incredible diver, but she consistently shows up the boys.

My turn came around only a few dives later. As I dropped down past the upper deck towards the stern, I couldn’t make out any fish, so made a path to the rear opening. I landed on the lower deck and peeked over the edge into the belly of the ship. Moments passed with no movement and then a fish slowly emerged from the darkness. This was a large, cautious gag and was staring me down as he crept closer. I was finally able to inch my gun into position and fired a shot, hitting him square between the eyes. Completely immobilized, I was now able to get him out of the wreck. Back on the boat it was easy to see that I was only second best for the day behind Ashley, but the thrill of the hunt had me buzzing. 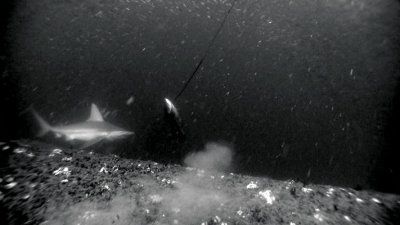 "MOMENTS PASSED WITH NO MOVEMENT AND THEN A FISH SLOWLY EMERGED FROM THE DARKNESS. THIS WAS A LARGE, CAUTIOUS GAG STARING ME DOWN AS HE CREPT CLOSER."