I can still vividly remember the first kingfish I ever laid eyes on. It was 30 years ago and I was fishing off the rocks at Te Arai Pt and, having just cast a dead sprat into the crystal clear water, didn’t know what to expect. All of a sudden, I saw this huge fish that was so much larger than anything I had ever seen before, cruising down the face of a small wave, directly above my bait without so much as a look at it. I knew this was a kingfish from all the fishing books I had pored over, but never did I think I would ever see such a grand fish in reality.

Panic and excitement set in as this kingfish swam by without so much as a whiff of my bait. It didn’t matter how many times I cast the bait in its direction, it showed no interest at all.

As an eight year old, I could not appreciate the power of one of these predators and the reality is that if this fish had taken my bait, it would have pulled my rod out of my hands. However, one thing I did know was that some day I wanted to land one of these magnificent fish. 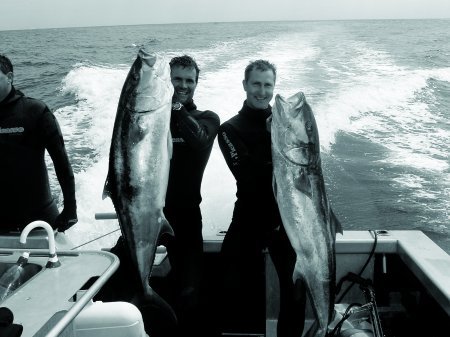 When I was 15, I finally got to see my first kingi underwater. I was snorkelling on the first day of a two week holiday at Great Barrier Island, with a Hawaiian sling in hand. The target species was “anything that moved”, normally red moki. All of a sudden a kingfish of about 12 kgs was sitting right in front of me checking me out, as though to say “what are you doing on my turf?”

I had a major dilemma - do I spear him in the head with my underpowered sling and risk being spear-less for 2 weeks, or do I show some restraint and let him swim by?
Even though I still have some regrets, I think wisdom had its way and I let him swim by, but not without lots of yelling at my friends and plenty of embellished stories later.

Fast-forward 8 years. I had just got married and we had shifted into a beachfront house at Algies Bay. It was our first morning there and I opened the curtains to have a look at the stunning vista, but the very first thing I saw as I looked out on the glistening bay was the bow wave of a kingfish swimming in a metre of water doing circuits past our boat ramp. 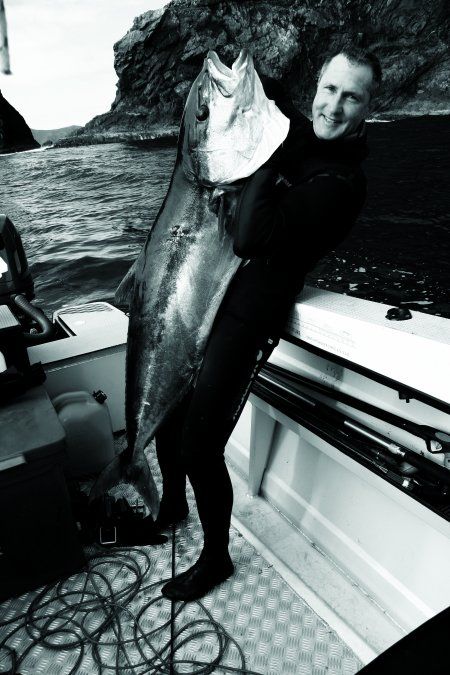 There wasn’t even enough time for Jo to say what a beautiful day it was - I was already downstairs and into the water with my speargun in hand. That morning and for the many other unsuccessful ones that followed, I would find myself standing in waist deep water, waiting for the kingfish to swim past close enough so that I could actually see it in the 3-4 ft vis. More times than not the contemptuous fish would park up, just outside the water visibility range so that when I lowered my head into the water, I couldn’t see it. When this happened I would normally take a shot at the fish from above the surface. I never did hit one this way and I never did figure out which way the angle of refraction went. If only I paid more attention in those physics classes!

Finally, my morning of triumph came as I was driving to work one day. By now it was an obsession to land one of these kingfish from my local beach and as such my dive gear was always in the back of my Holden station waggon, just in case a fish was sighted.
I had just pulled up to Eric’s place to pick him up and no sooner tooted the car horn when I looked out in the bay to see four bow waves cruising just in front of his house. I quickly yelled out to him to meet me down the beach with the car as I ran with gun in hand to get in front of the direction they were heading.

By now I was swimming, with my mask out of the water, to intersect their path and they were only 4 metres in front and heading straight at me - when all of a sudden the bow waves disappeared. Quickly my eyes focused under the surface to see the faint outline of a kingi disappearing past me into the murk. Whoompha, I let him have it, right where I imagined its body to be. After a short but furious fight in the metre deep water I restrained the fish in a flurry of white water, only to realise that I had no knife, or float for that matter, on me. As I approached the beach, Eric, who had finally caught up with me and I let out a few whoops and hollers as he handed me a knife to seal the deal.
A passer-by walking his dog was very excited, as we calmed down acting as if we did this everyday. (A side note here - we were 30 mins late for work, and for a few minutes, the clients, whose house we were renovating were not impressed… until I pulled out a 12kg kingi - minus a few steaks, and presented it to them. It’s amazing how quickly you can go from zero to hero. I was the favourite son for the week!) 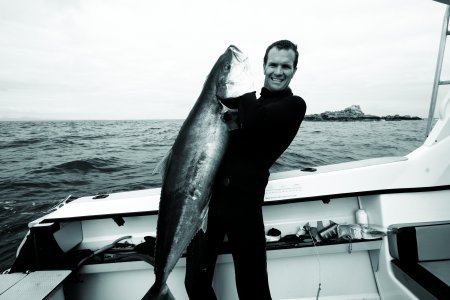 The most spectacular kingfish sight I have seen was while diving at an offshore reef on the west coast. We had fantastic visibility of easily 30m plus, probably the best I have seen in NZ. There were plenty of small schools of kingies cruising around on this fishy bit of reef. When out in the distance I could see lots of miniature heads swimming towards me. I thought it was a school of grey mullet or kahawhai, but as they materialised, I quickly realised they were kingies, hundreds of kingies, no maybe even over a thousand kingies. The school was so tightly packed around me, with new fish continuously joining this circling mass, that I could not physically single one out, let alone try to pick out a big one. So I just watched and enjoyed the moment, knowing I was seeing something truly special.

These days I only spear a few kingies a year, as I will normally let someone else on the boat take one to share around, but I still get just as big a kick out of seeing a kingi swim past as that 8 year old standing on the rocks, 30 years ago.

Whether it’s in the harbours, off the rocks, at the outer islands’ reefs or offshore around some flotsam, I think you would have to agree with me that kingfish are one of the jewels of the Kiwi fishing crown. Let’s make sure that for generations to come many other kids get to see one of these magnificent fish cruise past them as they are fishing off the rocks – just as I did, all those years ago.