When conditions are right and the vis allows, Hawke's Bay can be a great place to hunt...
By Kolt Johnson

“You need two weeks of light westerlies and no swell.” That’s what Mel Blackwell once told me at the Freedom Divers club meeting. He was talking about the conditions necessary for good visibility in Hawke’s Bay. It’s no wonder that our club meetings are filled with stories from locales like the Bay of Plenty, Kapiti Island, and Great Barrier. But every once-in-a-while we catch a break and it’s on in Mud Town.
Pania Reef is Napier’s signature dive spot. With over 14 metres of relief, it provides ample habitat for a wide range of species. Large caves, gutters, sheer drop-offs and nearby weed lines keep the diving interesting. Pania’s close proximity to the port also makes it easily accessible for a quick afternoon or early morning dive. At times, Pania can be a bustle of activity with kahawai, kingfish, and trevally patrolling the reef edges and blue moki, tarakihi, porae and the venerable butterfish on the weed lines and in the shallows. My experiences diving Pania have always been great and are often full of surprises. From moray eels to longfin boarfish, there is always something to see for those that look closely enough. 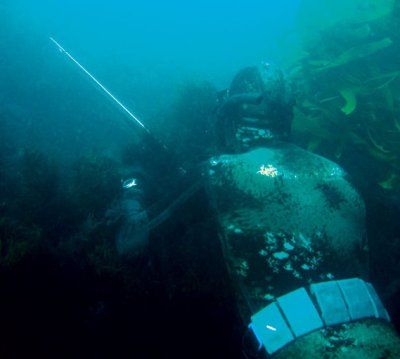 In a place like Hawke’s Bay, shore diving can be hit-or-miss, but can also be very rewarding. During dry summer months, coastal waters can be surprisingly clear on occasion and collecting a sampling of kaimoana can be quite enjoyable. Access is generally good and those willing to walk for an hour will be rewarded with particularly good diving. The underwater terrain can be very unusual in places. Much of the rock in Hawke’s Bay is mudstone and can be easily recognized by the horizontal layering on exposed sections. This can be advantageous to finding crayfish, as the weak layers easily erode, forming thin gaps that provide good crayfish habitat. Several good crayfish spots can be found within easy reach of shore and catching crays over 2 kilograms is not uncommon. 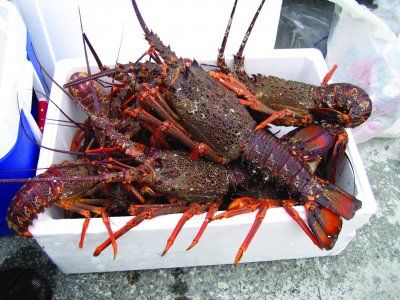 Every crack seemed to be loaded. In one particulary large gutter, i found a great section of overhanging rock that held a lot of crays. As I was cruising the periphery,I made out a set of extra large antennae.

On a trip last November, Nick Williams, Kerry Brannigan, Jono Joe, and I went in to a local shore - dive spot in search of crays after diving Pania Reef. Every crack seemed to be loaded. In one particularly large gutter, I found a great section of overhanging rock that held a lot of crays. As I was cruising the periphery, I made out a set of extra large antennae. I surfaced to gain my composure and let my heart settle. Back down, I lunged for the cray, but he was surprisingly agile and made his way to the back of the crevice. I went in after him and was able to just barely get a hand on one of the horns. Try as I might, I couldn’t get him to budge and ended up breaking off half the horn. I went back to the surface to breath up for a second try. By the time I made it back to the cray’s lair, he had moved to the very back with no where to go. I managed to jam myself in far enough to see the white end of the broken horn and with a twist of my shoulder, extended my hand further in and grabbed the base of the other horn. With some careful movement and a little luck, I finally pulled him loose. At the surface, I was ecstatic to see the size of him. Back at the boat, I saw Nick swimming in with a big smile on his face. He had managed to secure another fine crayfish over 2 kg and thought he had beaten me, but alas, my big male took top spot. Sorry, Nick! 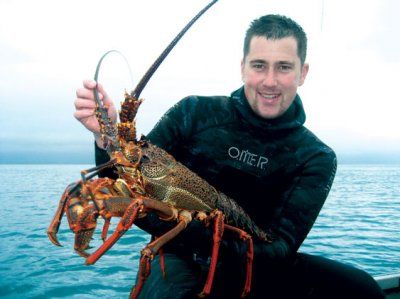 I saw Nick swimming in with a big smile on is face. He had managed to secure another fine crayfish over 5kg.

Not only do the reef and sand produce in Hawke’s Bay, but there is plenty of opportunity for a bluewater trip in the summer months. Just recently, Kane Grudy speared a pending New Zealand record albacore tuna during a bluewater burley session 13 miles (21 kilometres) offshore from Napier. As he was surfacing from a deep dive, he looked up to find several albacore zipping through the burley above him. Like a white shark at Seal Island, he struck from below, sending a shaft strait up and out the fish’s back!
Plenty of other offshore fish can be brought from the depths including kingfish, skipjack tuna, and even the odd mako or blue shark. On one trip with Kane and Jon Bridges, we set out the flashers and burley and were greeted by two blue sharks. The larger of the two was mesmerized by the flasher and made several passes where he swam right up and started rubbing his body all over the flashing mirrors. 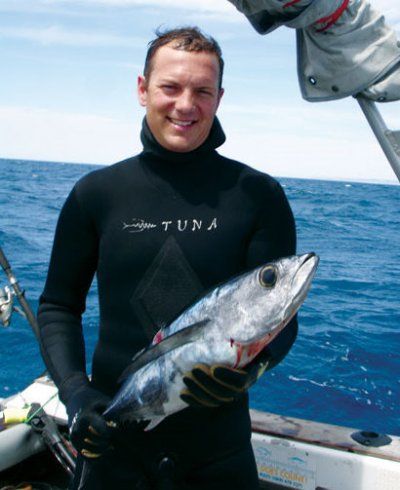 In late January of this year, I was greeted by one of the open ocean’s most interesting creatures – the flying fish – while diving at Bare Island. While not a true bluewater location, Bare Island does seem to attract the occasional oddball fish, probably due to deep water nearby. We had spotted a few kingfish along the reef edge and I decided to dedicate some time looking for them. While breathing up along the drop-off, the school of flying fish swam directly underneath me in single-file. I was able to line up with my trusty 85cm custom gun and place a shot directly from above. Pat Swanson was joking with me about my wood guns at Nationals, but all I can say is they deliver in spades! At 0.56 kg, my flying fish qualifies for the top spot, a pending NZ record. 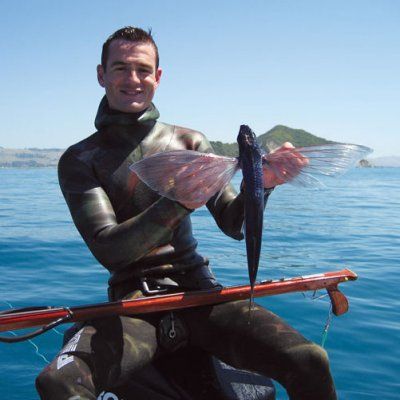 It’s easy to complain about the wind and swell ruining a perfectly good weekend of diving, but the fact is the challenging conditions in Hawke’s Bay generate travel and talent. The Freedom Divers are a tight-knit group of watermen, no doubt made better and more cohesive by the conditions faced here in the Bay. Chances are, we’ll see you on the water at Mayor or White before we see you on the beach at Waipatiki, but when the getting is good, we’ll be happy as pigs in a wallow here in Mud Town. 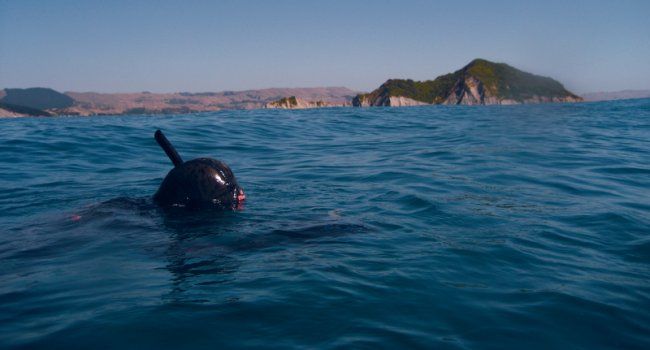 Its easy to complain about the wind and swell ruining a perfectly good weekend of diving, but the fact is the challenging conditions in Hawkes Bay generate travel and talent.