What percentage of your catch do you actualy consume and how much of it goes to waste? Perhaps we should consider trying to maximise the yield of every catch and throw less away

In 1881 my great grandfather started a meat processing plant in Sydney. The company stayed in the family for 99 years with my grandfather later taking over as Managing Director and then my father following in his footsteps. This is where I learnt terms like "live weight", "dressed weight", "yield", etc. What has this got to do with fish and criminal waste you may well ask? Read on dear friends.

When a beast comes into an abattoir it is first killed, then beheaded and eviscerated (gutted). The hides are sent to a tannery and the edible offal is then removed such as the tongue, cheeks, kidneys, heart, liver etc and processed accordingly. The inedible offal such as lungs go to pet food and the gut is washed clean of grass and rendered along with fat trimmings and the head to create tallow and meal for fertiliser and animal food. The beasts "dressed weight" then weighs approximately half of its "live weight" but the only parts not used have been the grass from the gut, and although of no commercial value, it is normally ploughed into pasture as fertiliser. Our beast is now boned with the meat, (yield) approximately 60% of the dressed weight eventually ending up on a table with perhaps a nice pepper sauce or between two buns at Ronald McDonalds. The bones have all gone to the rendering plant for processing. How much is used? Practically everything. How much is wasted? Virtually nothing.
Compare this to our poor old fish that has just sacrificed its life for our table. Slice off just the fillets (skinned of course) and throw the belly flaps, the wings, the skin, the head and all the flesh between the bones back in the briny. What is the yield?? Bugger all as a percentage of dressed weight!! How much is used? Not a lot. How much is wasted? Way too much!.

Why? Could it be that we have had it too good here in Godzone? If we watch our Asian friends fishing we will notice that they take the whole fish home and extract every last morsel from it. So would we if we had been brought up where there were far more people than natural resources and there was a scarcity of fish.

Why? Could it be that we have had it too good here in Godzone? If we watch our Asian frends fishing we will notice that they take the whole fish home and extract every last morsel from it. 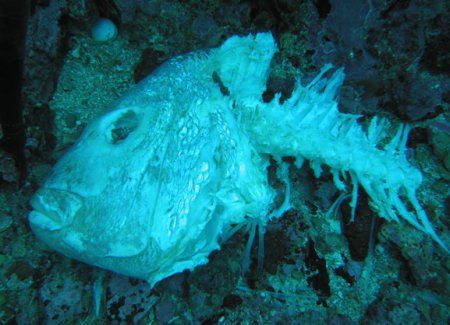 Could it be that we have never been taught to remove the scales from our fish and cook them whole? Are we so afraid of finding a bone in our fish that we just can't be bothered? Have we never discovered just how juicy, tender and sweet the meat from the head of a nice sized fish can be, or how much meat there is between the bones that we normally throw away? I think many Kiwis don’t realise that the skin of many fish is not only edible but can also be very tasty.

Have we ever tried making a fish soup or stock from the heads and skeletons of a few good snapper? Maybe we don't know how to peel the skin off the flaps of a reasonable sized fish and cook the flaps whole or just scale them and bake them.

Could it be we are just too lazy to work a bit harder for a better yield?

Could it be that we were never taught anything different?

I think it is probably a combination of all these things, so apart from changing the way we think, what else can we do about it?

Getting yourself a good fish scaler would be a great start, and next time you reach for your filleting knife, think twice and grab your scaler instead. As well as respecting the fish, there is also something very special about serving up a whole fish to your friends and family.

As a youngster growing up in Sydney I spent most of my time fishing or spear fishing and when we got back to base it was one on gutting and gilling and one on scaling. Then we would divide up the fish and head home to cook up the catch.

So lets start eating more of what we catch and throwing less away. Instead of just bragging about the live weight of our catch lets maximise the yeld from easc fish and enjoy every last morsel.

Maximise your catch - try cooking your fish whole. Fish scalers can be purchased from most fishing shops.

Since coming to NZ some twenty years ago I have almost never seen a fish scaler in anybody’s gear and don't recall actually seeing anyone use one. Recently I came home from a pretty successful spear fishing trip with about 4 kilos of snapper bellies and flaps that were just going to be thrown overboard. Equally as much had already been given the old heave ho before I noticed what was going on and put my hand up. Apart from the number of meals we have enjoyed, that’s about $120 worth of fish at New World!

After all, we spearo’s claim to be the most environmentally friendly form of fishing as we don't get ‘by-catch’. We pick the fish we spear by size and only shoot species that we can eat. So let’s take that approach to the next level.

Try your next pan-sized snapper grilled like a steak. Scale your fish and then put a couple of diagonal cuts on each side, rub in a little butter, a squeeze of lemon, some pepper and salt and grill each side for 5-10 mins. The time taken depends on the thickness of the fish so at first it may be a little trial and error but as a general rule – it is ready when the flesh comes away cleanly from the bones with a fork.

Or - try your next oven- sized fish scaled and then wrapped in tin foil with some lemon, onion and tomato slices and a sprinkle of salt and pepper and baked in the oven. Try a moderate 180C oven for about 30 – 40 mins, (depending on size of course) Like before, your dinner is ready when the flesh comes away cleanly. It really doesn’t get any better than that!! What’s left over can be reheated in the microwave or enjoyed cold or in sandwiches.

So let’s start eating more of what we catch and throwing less away. Instead of just bragging about the live weight of our catch, let’s maximise the yield from each fish and enjoy every last morsel.