Take your training to a new level with these essential guidlines.


If you don’t have easy access to deep water, then dynamic apnea is one of the best ways to train for both freediving and spearfishing. You can work on fitness and technique in a very safe and controlled environment, and because conditions are always the same, it’s easy to keep track of your progress. Even if your focus is on deep diving, you still pick up a lot of relevant information from experimenting with swimming speeds, breathe-ups and finning techniques. It’s also a competitive discipline in its own right, and there some essential aspects to consider if you want to take it further than simple off-season fitness training and work on increasing your distances.

You need to be weighted so that you are perfectly neutral in the water. If you are too heavy or too buoyant, you will waste energy either keeping yourself under or preventing yourself crashing into the bottom. Weighting becomes more important the slower you go: this is why it is vital for the Dynamic No Fins discipline, in which there is a long glide after each stroke and little extra power available to compensate for incorrect buoyancy. If you push off and let yourself slow to a halt without changing your posture, you should stop in mid-water without floating or sinking.

The distribution of your weight is also important. If you are neutral overall but front-heavy, you will find you need to adjust your technique to counteract a nosedive with each stroke. This usually means an arched back or uneven kick, both of which will break your streamline and slow you down.

Most divers find their weight distribution is close to perfect when using a neck weight because the lungs are very buoyant, whereas the rest of the body is nearly neutral. However the newest generation of monofins usually contains a significant volume of neoprene or other foam rubber. This means ballast may need to be added to the fin itself.

Streamlining is probably the most important factor for dynamic apnea. In the pool, where buoyancy is constant, the only thing stopping us from going as fast as we like with no effort and swimming a 500m dynamic, is the friction our body shape causes when moving through the water. Thankfully, we have a lot of control over what this shape looks like and there is scope for endless fine-tuning. The streamlined posture developed in swimming and fin-swimming has turned out to be nearly optimal for freediving: head down, chin tucked in slightly, arms locked together tightly above the head, back and legs straight.

There is always a trade off to be made between relaxation and streamlining, as tucking into a really tight streamline will mean tense shoulders. A good policy is to train with a tight streamline in order to increase shoulder flexibility, then back it off slightly in competition; you should be able to maintain almost the same degree of streamlining with much less tension. Streamlining becomes more important the faster you swim, because friction increases exponentially with speed, i.e. doubling your speed will mean you incur four times as much resistance. However it remains the most fundamental factor for dynamics, even at low speeds. When travelling slowly with bifins, divers usually keep their arms down but hunch the shoulders slightly and tuck the chin down. This allows for maximum relaxation and a profile that is still fairly streamlined but significantly wider. A wide profile helps to reduce the rolling action caused by even a good bifin kick.

Aside from the frontal profile presented to the water, much of the drag we incur comes from the body’s irregular shape. Wearing a tight-fitting suit can reduce this by smoothing over irregularities and compressing muscles, preventing the skin's surface from rippling and vibrating.

People's physiologies differ markedly: some have low resting oxygen consumption and have good static times but consume a great deal more oxygen as soon as they start exercising. Divers with these traits sometimes find they need to treat dynamics like mobile statics, moving very slowly and counting on their long breath-hold to get them to the end. Others have a relatively high resting oxygen consumption and correspondingly lower static times, but lose little of their efficiency when exercising and can take advantage of this by using more energy and swimming faster. On average, swimming speed in dynamics has come down amongst the top divers and few now use the fast, continuous kick that used to be the norm.

Find an efficient speed and try to stick with it through the swim. Most freedivers using monofins travel at 1-1.2 metres per second (m/s) while those using bifins tend to be slower, at around .8 – 1.0m/s. Most new divers start off by swimming far too fast in an attempt to get to their target distance 'before the air runs out.' A better way to start is to focus on relaxing and getting more forward movement for the same minimal power input, by paying careful attention to technique. If you feel like you need more speed, try to achieve it by streamlining rather than by putting in extra effort. You should be able to feel which parts of your body are creating turbulence – often it is the head/shoulder area or the lower legs. 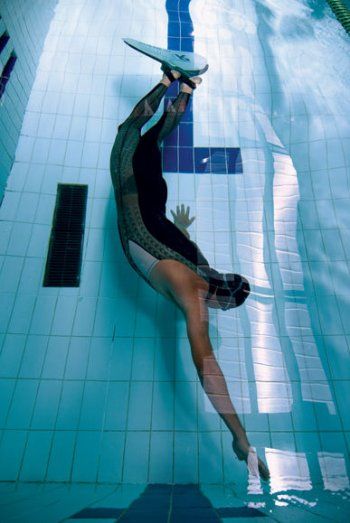 UNLIKE FIN-SWIMMERS, FREEDIVERS SPEND A LOT OF TIME WITH THE BLADE NEUTRAL. ITS IMPORTANT THAT THE MONOFIN HAS SUFFICIENT ANGLE BETWEEN THE BLADE AND THE FOOTPOCKRTS TO ALLOW YOU TO GLIDE WITH MINIMAL RESISTANCE WHEN THE BLADE IS NOT FLEXED ESPECIALLY IF YOU'RE USING A KICK & GLIDE APPROACH.

Although you need to relax, there is not much point bending languidly at the back or hips if this effort is not carried through to the fin. Amplitude should slightly and steadily increase at each point in the chain of joints that contribute to the stroke (back, hips, knees in that order) but it’s important not to let your hips or knees go ‘loose’ in an attempt to make up for limited back flexibility or to get a feeling of relaxation. Instead, keep the movement tight and 'connected' all the way from your torso through to the blade. In addition to finding the right amplitude at each point in the chain, the muscles need to fire in the right sequence and this timing can take some time to learn.

As the blade loads up, you should feel the pressure go directly onto your abdominals and hip flexors. If you've let your hips or knees flex too far then the load will go solely on your quads, as you have effectively decoupled the fin blade from your torso.

When using bifins, kick from the hips with fairly straight legs but allow enough knee bend to stop your body rotating with each stroke. Most people find they are bending their knees a lot more than they think when they review video footage of their dives, so if your legs feel 'straight' the knee angle is probably about right.

A monofin is more efficient for all but the very slowest swimmers. Monofins are inherently more efficient for two reasons: 1. you don't waste energy rotating the body with each stroke and 2. the stroke is more powerful with a lower amplitude, which means the blade is shorter and a higher proportion of its surface area is at an effective pitch angle at any given point in the stroke. Bifins, by contrast, require a much higher amplitude but less powerful stroke, and so the fins need to be long and flexible in order to ensure some part of the blade is at an effective angle at any particular point over this range. The rest of the blade meanwhile is just along for the ride, adding to the resistance you're incurring.
Another benefit of using a monofin is the distribution of the load across more muscle groups (abdominals and back, in addition to hip flexors and quads). Although this is not necessarily more efficient (the overall energy expenditure doesn't change) the muscle fatigue associated with anaerobic exercise can be a limiting factor in freediving, so spreading the load around can help prevent muscles from failing completely.

Unlike fin-swimmers, freedivers spend a lot of time with the blade neutral. It’s important that the monofin has sufficient angle between the blade and the footpockets to allow you to glide with minimal resistance when the blade is not flexed, especially if you’re using a kick & glide approach. To test this, simply put the monofin on and point your toes. If the blade is almost in line with your shins, you’ll be well streamlined. Not many people have enough ankle flexibility to allow them to streamline with a flat blade like a waterway. (Model 1). In my case I need about 25 – 30 degrees between footpockets and blade. Note that it will require a reasonable amount of back flexibility to use a blade that is angled far enough to be truly streamlined. If your back is not flexible enough then you may struggle to achieve enough amplitude without excessive knee-bend and the power (down) stroke may feel quite short.

The advantage of bifins is that they allow you to travel very slowly, so some divers with very good static times use them to do very slow, relaxed dynamics. You need to be quite disciplined if you’re using bifins: because you are not as streamlined, speeding up during a swim will cause a lot of drag and burn up your oxygen reserves very fast.

As with all freediving disciplines, it’s essential to train with an active spotter. Blackouts are not as common as they are in Static apnea because the discomfort tends to be greater and fewer divers can push themselves hard enough to get really hypoxic, but they can still happen. New Zealand has an enviable reputation in the field of Dynamic Apnea with several divers inside the world’s top ten, so there are plenty of people around to train with or get advice from.