When the good spots are too far for a shore dive; you don't have a boat and you're too lazy to paddle a yak - what do you do?

An invite from my friend to spend the weekend running in her new jet ski at Mount Maunganui was too good to pass up… of course the spear fishing gear went in to the car boot as well as the Mount held some of my favourite hunting grounds.It didn’t take a rocket scientist to work out that this new toy could play a part in reaching some spots I had always wanted to hunt as I had heard urban legends of a channel marker buoy that was home to some very large kingfish. So off we set on the new wet bike to check it out…

After a short blast out to the spot, I geared up and got into the water leaving my mate to idle around in the current and hopefully attract the attention of some curious sea monsters.The current was strong and it was hard going to stay near the marker which was fixed to the sea floor about 25 metres down. I made a few descents but saw nothing other than a few bait fish.I was convinced this was just another fisherman’s urban legend as the stories were always from a mate of a mate who had seen these big kingi’s.

"I got to the surface and kicked away from the marker towarsds the jet ski to avoid a potentially dangerous entanglement." 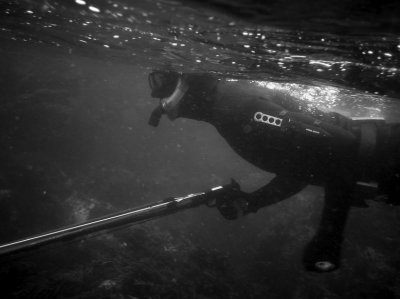 Disappointed, we took a ride to Rabbit Island where I normally get a good feed of butter fish and crays. This time was no exception and I filled the under-seat bin in the jet ski in a couple of hours while my mate followed around like an oversized float on my float line.I tried several times to convince her to get in the water with me to admire the beauty of what the blue has to offer, but as al

ways the answer was “You’re crazy! How do you know if there are sharks in there?” My reply was… “It’s easy, just dip your finger into the water and then put it in your mouth”… “Yeah, then what?” “If it tastes salty… there’s a good chance there’s sharks in there!!Subsequently there were a couple of little pesky bronzies following me most of the day staying just on the edge of visibility waiting to snatch my catch at any given chance, not that I let on! That was an advantage I suppose of having a jet ski as a floating platform - it kept the fish out of the water avoiding that game of tug-of-war on your float line with the sharp end of a hungry shark - a game familiar to most seasoned spearos

With the fish bin full, we decided to head home with a slight detour back to the channel marker for one last look.When we got there I noticed the current had gone completely as the tide was on the turn.I dropped back into the water and the visibility wasn’t good. I followed the steel marker legs down to about 15 metres and still couldn’t see the bottom. I stopped at about the 20 metre mark where I could just make out a shoal of large kingi’s circling the marker. They saw me and spooked, darting in a few different directions only to regroup and start milling around me!

There were some really big fish amongst a shoal of about 15 fish, a couple would have been on the upper side of 2 metres long which are still, to this day, the biggest kingi’s I’ve seen.Several of the smaller fish came right up to me rolling on their sides a bit to check me out, while the larger fish kept just out of range… my guess is these fish don’t get that big by being stupid! 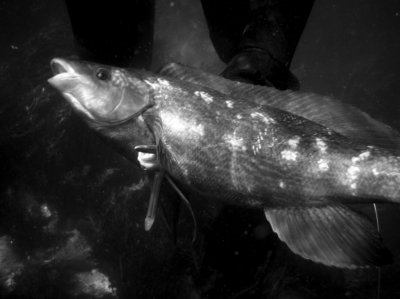 Remembering I have to breathe, I took a shot at one of the smaller “stupid” fish that swam directly below me. I could see him directly from the top with the iridescent blue- green colour reflecting back up at me. The shaft impaled the top of his head just behind the eyes and slightly to one side. It was at this point I realized he was a little bigger and also deeper than he looked. I couldn’t see the flopper exiting from the fish so the shaft must have reached the end of its tether as it struck its head.

The fish made a powerful dash to the bottom trailing a thick brown cloud of blood as I headed up my float line, keeping a bit of tension to keep him from tying me around the channel markers legs. I got to the surface and kicked away from the marker towards the jet ski to avoid a potentially dangerous entanglement. It took about ten careful minutes to get the beast to the surface while he tried to drag me back down. I anticipated the line going slack at any time, as I couldn’t see the flopper open on my spearhead, so I figured it was a flesh shot. I finally got a hold of my spear shaft and almost had his gills but a final dash left the spear bent at almost 90 degrees. The fish took off and went in tight circles around me on the surface, tangling me in my floatline and mono for a few seconds… not a nice feeling.

At this point I was glad I took one of the smaller fish! I dragged myself up onto the jet ski and I think I was as tired as the poor fish! I dispatched him and removed the shaft which had not exited the lower jaw. The flopper had opened against the roof of his mouth so he wasn’t going anywhere.

On our return, the boat ramp was very busy with fishing boats retiring for the evening and many of them stopped and stared as I unloaded the day’s catch off a jet ski with nothing but a spear gun in hand. Got some rather funny looks to say the least

That night the steaks went great on the BBQ with some garlic and a bit of white wine while we planned the next outing to shoot the bigger, smarter ones that got away… 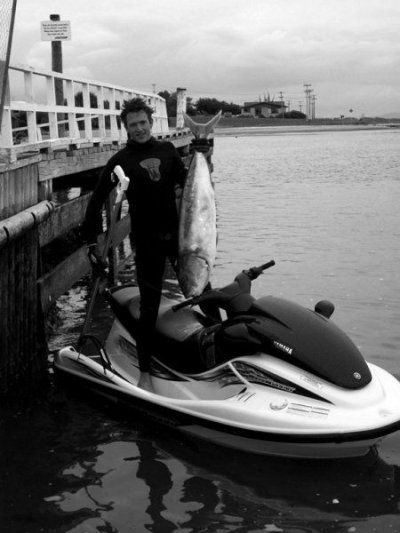