Steve Hathaway discovers the amazing kelp forest in the city of Angles and develops an addiction to pursuing the elusive White Sea Bass.

As a Kiwi, the thought of living in Los Angeles for a year was fraught with mixed emotions. Would this City of Angels have a murder on every corner like the movies depict, and more importantly what would the diving be like in such a large metropolis?
We were six months out from leaving NZ and I was already meticulously doing my homework, trying to discover what the diving would be like. I quickly discovered that one fish was king there, the famed White Sea Bass (WSB).

For many years previously I had read stories about WSB without taking any notice about where they were actually caught. I had marvelled at the photo of Skip Hellen and his immense fish that at that time was the world record at 80lbs (36.3kgs), not realising until now that this fish was actually speared in LA!

The WSB have been nicknamed ‘white ghosts’ because of the mystical qualities they seem to possess, appearing out of nowhere and disappearing just as quickly.

WSB are a very seasonal fish and to my frustration I arrived in town when they were on holiday. But the spearo’s I had befriended on arriving were only too keen to fuel the fire with many stories of XOS WSB living on our doorstep. I would sit spellbound, listening intently trying to gather any tips or techniques that would help in my quest, but the more I listened the more daunting and difficult the challenge began to seem. The way people talked about these fish it sounded like they were almost impossible to spear. One of my friends took 20 years to spear his first! 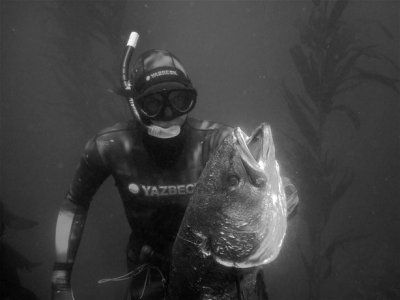 Steve ascends to break through the thick kelp canopy having secured a WSB.

There were a number of months to wait until the WSB were due to arrive in LA waters but this time wasn’t wasted as I quickly got accustomed to a completely new underwater world. Huge forests of kelp, sometimes the size of many rugby fields rose from the depths stretching all the way to the surface. The kelp beds were so dense at times that it was impossible to swim through them on the surface. Instead we would have to leave light and comfort and descend into the darkness below the canopy, until the urge to breathe would send us upwards again to break through the dense carpet above with only enough room for a snorkel to emerge. Not for the claustrophobic!

Finally after three months of waiting, my chance came to try to spear a WSB. Word was quietly filtering through that the WSB had arrived on the coast. I had already learned that not all voices were to be trusted, such is the hold that WSB has on people over there —rumours and secrecy shroud this sought after fish. Normally, if you hear the fish are on the coast you are too late, they have already moved on. But I was sure my sources were reliable. So I left home at 5am to miss the traffic that clogs the freeways from 6am and started on my hour long journey to Palos Verdes, the mecca of WSB hunters and the place where Skip Hellen got his 80lber.

Navigating the freeways and busy city streets through this concrete jungle then winding through the hills to suddenly be met by the beauty of the Pacific Ocean is something to behold. Sheer cliffs where the desert finally meets the ocean, with multi-million dollar mansions perched on her crest all overlooking the hectares of kelp moving as one from the slight Pacific swell like synchronised swimmers.

Picking my way down the cliffs was not quite as much of a mission I was made to believe and I had quickly negotiated the track, scurried across the boulders and entered the zone.

These great forests of kelp hold a myriad of life, which include huge schools of bait, friendly harbour seals which sometimes playfully chewed on our fins, schools of barracuda, small sharks and the occasional protected Black Sea Bass, as well as many other species. I was blown away by the wide array of life I was seeing at this spot as well as the amazing vis which was 12m on this particular day, especially being so close to one of the largest cities in the US.

This would have to be the most stunning shore dive I have ever had! But as beautiful as it was—and I was savouring every moment—there was only one goal here so I had to stay focussed.

"I quietly left the surface, glided down within shooting range, lined it up and shot it right behind the head causing it to roll over and die instantly. Yeehaaa!!" 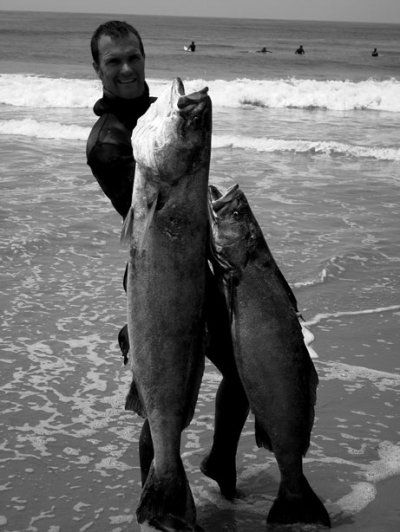 The magnificent spoils of one of the most spectacular shore dives Steve has ever had- two prime White Sea Bass.

My weapon of choice was a 1200 Picasso with a reel, as floats get caught in the kelp. Swimming quietly, I took my snorkel out of my mouth as I left the surface so as not to give off any noisy bubbles scaring away my quarry. Sinking almost motionlessly, I could feel my heart slowing as all body movements were kept to a minimum. Years of refining my snapper hunting technique were now coming into play. But after a couple of fruitless hours of using the canopy as a cover then descending down the kelp stalks, covering as much area as I could, the conversations about how difficult these fish are to spear came flooding back almost tricking my mind into believing them. Suddenly, hiding behind some kelp I saw the tail of the fish I had been dreaming of for the last 9 months, almost motionless—just hovering there. It was not big, but I was positive it was legal size. I quietly left the surface, glided down within shooting range, lined it up and shot it right behind the head causing it to roll over and die instantly. Yeehaaa!! What a beautiful fish! I quickly pulled it in, totally stoked that I had achieved my goal on the first attempt.

Over the next few months that the WSB hung around I managed to land a number more of these magnificent fish, some up to 60 lb (27.2kg). Anything over 60lb is very uncommon, which makes Bill Earnst’s new record of 93 lbs (42.2kg) unbelievable and set the local fishing community buzzing.

I wasn’t lucky enough to see any monsters like Bill’s record fish, but having tasted the fantastic diving that LA has to offer, in the words of Arnie, their Governor “Hasta la vista, baby”…. I’ll be back. 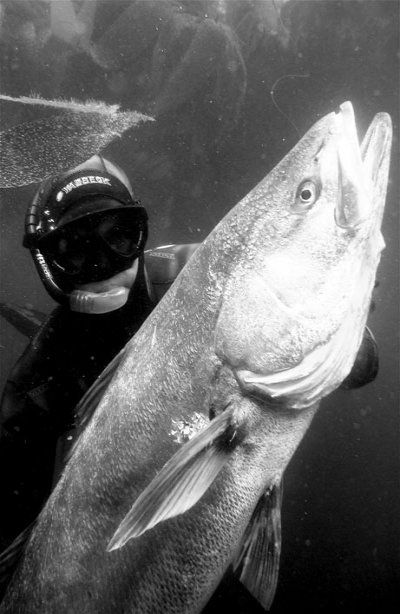 Steve hovers below the canopy in the darkness of the heavy kelp forest and displays one of his first decent sized WSB speared.