Before you ask, no, the Kiwi pole-spearing elite (Reid “Snapper Whisperer” Quinlan and disciples) did not get to me and convince me that (1) the only way to hunt gamefish is with a pole spear and (2) I should get to Bermuda asap to put it to the test.
The truth of the matter is that when I took on some new account abilities at work that meant I would be going to Bermuda every quarter, my first thought was “I guess I’d better buy a big Riffe gun to deal with all those Bermudian tuna, wahoo and marlin”. You can imagine my chagrin when I found out that in Bermuda you are only allowed to use a pole spear. Not to be deterred by this development, I spent my on my first few trips I set about tracking down the serious spearos on the islands, finding out how in the world one spears serious fish on a pole spear, and lining up a trip to put it to the test. This was ably assisted by my Kiwi friend Fiona Beck who fortunately happens to be secretary of the Bermudan Anglers Club.

With a bit of planning I had a day lined up with Fiona, some of her fishing mates, and local spearo Scott Amos aboard ‘Notorious’. This was in late March which is winter in Bermuda (most people think it is in the Caribbean but it is actually in the South Atlantic); there’d been a cold snap the week before and the water was chilly – for Bermuda - 18 degrees. Our game plan was to head out to a spot called Argus where there is a submerged structure, which was once the foundations of a now demolished WWII observation platform. Apparently this acts as a massive FAD, bringing in huge quantities of gamefish not to mention some big biteys – my kind of spot. Unfortunately however the weather was blowing up so we decided to try some inshore reefs about 5 nautical Miles out from Hamilton - Bermuda’s capital and main harbour. Hamilton. 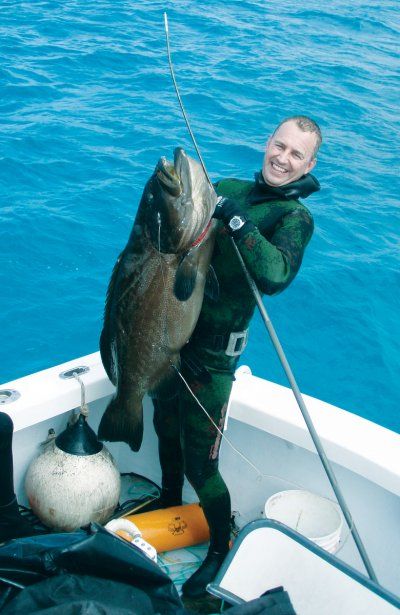 A beautiful 50 pound (22.7kg) black rockfish which Matt managed to spine with the heavy-duty pole spear, despite being badly injured it still bent the pole spear.

As we headed out to spot X Scott gave me a run down of our target species and the gear we would be using to get them. At that time of year on the inshore reefs the main target is what the locals call black Rockfish, which is more widely referred to as the black grouper, an official gamefish on the IGFA species list. The current angling world record for these is about 24kg though apparently spearo’s have taken them well above this and they can get as big as 50kg. It’s a tough fish and Scott uses a slip- tip setup where the tip wire trace connects to a dynema style cord and then onto a float line. S – small rubber bands are used to hold the tip and cord onto the pole. Once in the fish it’s like any other breakaway rig which Scott told me is important, as often the fish get back into the reef after being speared and drag the line all over the place. 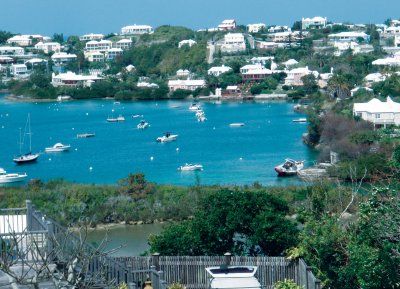 This pole-spearing is harder than it looks

The terrain consisted of relatively shallow (3-10m) coral reefs in ribbons or bommies coming out of a sandy bottom. The vis was not bad at 10-15m but compared to the gin clear 30-50m+ vis they apparently get in summer, it was pretty ordinary for Bermuda. On our first dive we covered a fair bit of ground but it was pretty dead – I think I saw a small 5kg black rockfish but it disappeared into one of the many holes in the reef before I got anywhere near it. We moved to a new location that looked much more fishy and pretty soon we came across another of our target species, the “Hogfish”. T, this is great eating and apparently can get as large as 10kg. I armed up the pole spear and dived down to line up a shot with the tip about 4 feet from the fish thinking that should be close enough. When I let loose, the big heavy spear hurtled towards the fish with all the speed of a lame tortoise and the fish had left the area before the spear even reached where it had been. Surfacing Scott said “No, no, no, you’ve got to get the tip within about 1-2 foot of the fish”. I thought “you must be joking” but again, not to be deterred, I thought “well I guess I’m going to have to get up close and personal”.

Snooping the big one

We scouted around a few more structures, eventually working our way along a long shallow ribbon reef about 3-5m deep. Scott indicated he was heading back to the boat but something told me to keep going for a bit longer. I moved along the reef and happened to look back and saw a big shape head out about 10m behind me – black rockfish, a big one. I loaded up the spear and then just sat there watching it thinking “how the hell am I going to get near it,” and eventually I had to let the tension off the rubber. Fortunately it moved back towards the reef and at that point my Kiwi snapper snooping instincts kicked in. (I was interested to see in Steve Hathaway’s story in last month’s NZ SPEARO he experienced the same thing with white sea bass in LA ). I loaded up and dived down hugging the reef and sneaking up to the reef lip where he had gone. I was thinking that of the bit of reef he went into thinking “I bet he comes back out just like snapper do if they haven’t seen you”. Sure enough he came into view right in front of me, and remembering Scott’s ‘get real close’ advice, I reached out and let rip with the spear. It went going right through the gill plate and out the other side with the fish then going nuts. While he bent the heavy spear before it pulled out, he didn’t fight as hard as I expected and I managed to keep him out of the reef and deploy the familiar kingfish bear hug and iki technique to dispatch him. It – turned out I had damaged his spine which accounts for why it was pretty easy to keep him out of the reef. Swimming back to ‘Notorious’ there were surprised whoops and congrats from the Bermudians when I handed the fish up into the boat – this was only about 10 minutes after Scott left me and he wasn’t expecting that! The fish came in at 50 pounds (22.7kg). 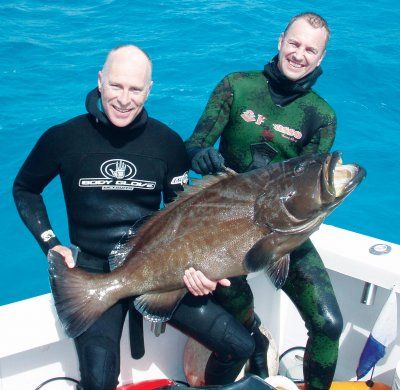 With the big one in the chilly bin we moved to a new spot, changed to smaller pole spears which are a bit faster in the water for smaller fish, and hopped along a chain of big bommie reefs checking every cave and crevice for lobsters. I eventually came across a nice hHogfish, so I loaded up the spear and dived - only to have the rubber break just as I lined it up - bugger. Being the great host he is Scott handed over his spear and we carried on. Eventually I landed a couple of hogfish but they were at the small, but tasty, end of the spectrum. 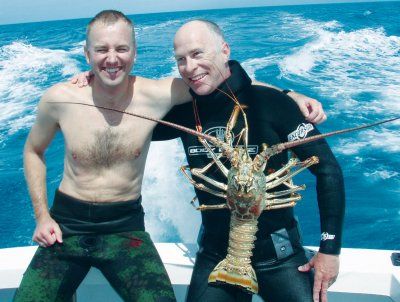 And the icing on the cake – Bermudian rock lobster

One thing I haven’t mentioned is that Bermudian diving involves covering a hell of a lot of ground in a short space of time – you simply need to keep going and looking until you find something. Scott took this in his stride but by the end of the day I was beat – I need to do a bit of distance training before the next Bermudian adventure me thinks. At this point I pulled up stumps however Scott was determined to score a lobster – this was the last day of the lobster season, he’d paid for his licences, but due to work commitments he hadn’t gotten out much and was currently lobster-less. This was a man on a mission and on what was probably the last stop of the afternoon he hit the jackpot using his snare (the cracks are usually too deep to catch them by hand) to land a nice 6-7 ponder. Well done mate. 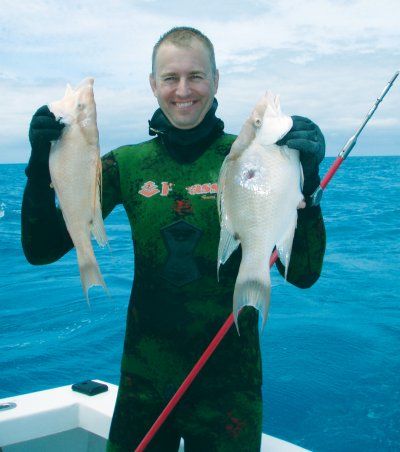 In closing, one reassuring takeaway from my Bermudian adventure is that the skills we develop in New Zealand hunting snapper and kingfish are pretty transferable to international terrain and species. With some great local guides – and a big thanks to Fiona, Scott and the ‘Notorious’ crew here (your complimentary Axemen memberships are in the post) – you can put these skills to work to score some great fish anywhere in the world. Next trip is in the Bermudian summer – game on for Argus me thinks! 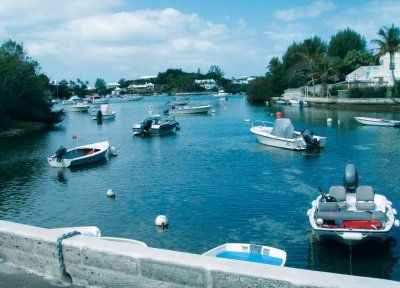