Nick Binks retells his encounter with a school of mahi-mahi off the northland coast.

0-5 knot winds, 20miles off the back of The Poor Knight Island. Trawling through a calm purple ocean, captain Lue yells out, “there’s fish jumping up ahead” as we get closer Mahi-mahi are jumping out in front of us, the lads grabbed their soft bait rods and I grabbed my Speargun. After a few attempts with the rods they had no success.

My turn was up, off the back of the boat I go. Within seconds a school of about 30 Mahi-mahi came and checked me out, after watching for while I hear the fisherman yelling, “Hurry up and shoot one”! The next time they came round I flung a spear in their direction, pulling it to the boat I realize it’s only a little faller. I decided another attempt was necessary. I decided to joined Cam, a mate of mine. It didn’t take long before they came around again. This time I took my time and lined up on the biggest one I could see in the school, about 25lb, my reel locked up after about 10m of line and I had just made it to the surface, kicking and holding on not wanting to let my gun go the spear unfortunately ripped out, I was gutted. 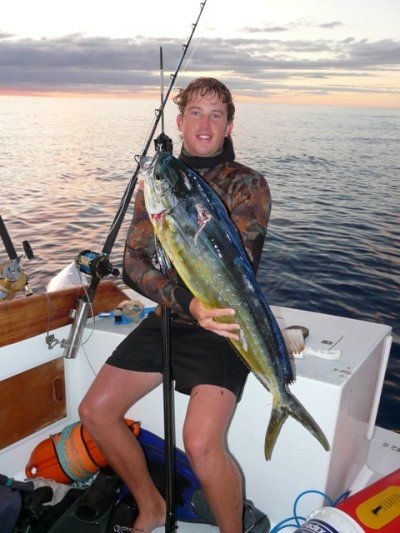 I heard yelling from behind, Cam had speared a nice sized mahi-mahi, around 15lb. I was determined to land a bigger one. I swam patiently around the fadd. Soon they returned this time more weary and responsive to my actions. They were keeping their distance. After diving down a few times’s finally one swum just into range. I let rip, great a successful kill shoot, the body turning from neon blue to a lemon yellow in a matter of seconds. It was amazing to see its transformation, like no other fish I had shot before.

After shooting enough for a feed, the captain was happy. He had already filleted my first fish and had it cooked by the time I had got back to the boat. We ate our days catch, fresh Mahi-mahi, delicious.

Cam and I decided to get back in the water and try to find the school again. They had disappeared but some smaller fish caught my attention, baby Kingies and some sought of Bass. It was a pleasure to witness an amazing ecosystem in 300m water with 50m+ visibility. Inky blue water surrounded with fish I had never encountered before. I hope to get to experience it again. 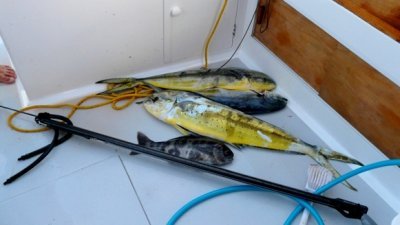