Since being introduced to spearfishing over twenty years ago, I have had an insatiable lust for hunting fish in both tropical and temperate waters. It is this love for the sport that has driven me to seek out and dive some of the hottest spearfishing destinations in the South Pacific - whether it be landing giant job fish or spanish mackerel on the Gold Coast or hunting dogtooth and wahoo in the Pacific islands. However there is one place I have been drawn back to year after year and that is the temperate waters of the Chatham Islands.

It is here, over the years, that I have had the opportunity to work for various commercial fishermen freediving for quoted paua, urchin and crayfish. This has been a truly magnificent experience which allowed me to take part in and witness some of the most incredible underwater happenings I have ever encountered. The Chatham’s lie some seven hundred kms off New Zealand’s east coast and are surrounded by clean, nutrient-rich waters. It is these waters that are home to some spectacular marine life; including a fish I have been obsessed with since seeing my first large school here some 14 years ago - the elusive hapuka. 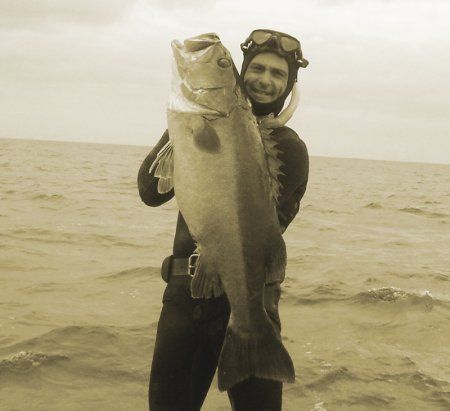 I can quite honestly say I have shot more hapuka than I have John Dory and boarfish. My biggest hapuka to date was taken from the Alderman Islands in 1996 - an absolute leviathan of a fish weighing in at 40.4 kg and only 460 grams short of the NZ record.
Hapuka are a truly magnificent species and generally found in deeper waters out of reach of even the most accomplished freediver. In the waters surrounding the Chatham’s, these fish are to be found in much shallower water and easily within reach of even a novice freediver. The hapuka generally associate with some sort of structure and, if limited in number, can be cagey and not always easy to spear. They have a tendency to disappear completely or hide amongst the labyrinth of caves and cracks in the structure in which they are living.

It is in these instances I enjoy a technique one might call ‘puka snooping’ which is similar to snapper snooping. Stealth is required along with a shorter gun with a reel and a torch to locate the puka hiding amongst the caves and cracks. Once the fish is speared, preferably with a kill shot, it is then a matter of extraction. When the hapuka are in large numbers which is generally the case in the more extreme locations, their curiosity gets the better of them and they will rise off the bottom to meet you or be mooching in mid-water. In these instances the school can number in the hundreds with many fish being 50kg or more. A more serious rigging would be recommended when trying to land these larger specimens. 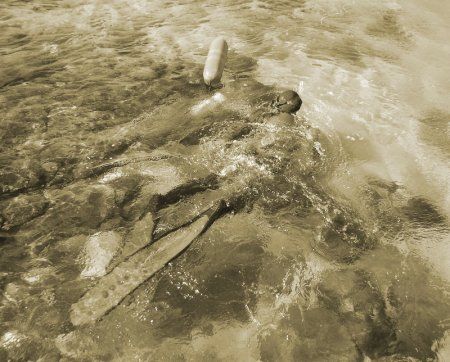 Along with other temperate water species such as oversized moki, trumpeter, cod, trevally, terakihi and massive crayfish, the summer months also produce large schools of yellow tail kingfish. In one particular spot, not far from the main settlement of Waitangi, I have seen some huge kingfish frequenting the area along with a very large school of hapuka.I have never taken the opportunity to hunt some of these larger fish as I have generally been too busy earning my keep by freediving for crayfish.

This summer all that is about to change…in association with Ocean hunter and Chatham Adventures you are invited to join us on a fully guided epic adventure into what I believe is one of the few remaining final frontiers relatively untouched by spearfishermen. 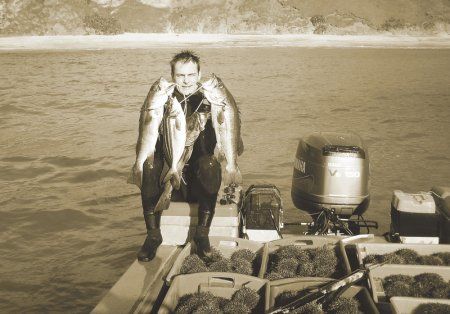 You will be hunting some of the shallower, well-known hapuka grounds and also targeting some of the deeper areas renowned for producing massive fish. One of the first hotspots you will be diving is a personal favourite of mine; a shipwreck lying on a sandy bottom in 18metres of water. The wreck acts as an artificial reef and sustains a huge array of marine life including a school of resident hapuka, massive moki and, inside the wreck, hoards of huge terakihi. I recently shot a pending NZ record specimen here and there were larger fish present. Join us as we go in search of record-breaking fish in one of the most spectacular dive destinations on the planet.

Scotty is one of the true last frontier spearos and the Chatham Islands are indeed one of the last frontiers that any spearo can imagine to dive.To find out more or to book your next hunting adventure email team@oceanhunter.co.nz and find out about the trips running in the New Year.