The purity of the chase is re-discovered with the use of the humble pole spear.

It’s said that the most effective time to hunt boarfish is in the early hours of the morning. My dive buddy James had planned to hit the road at 5am much to my dissatisfaction – however weather forecasts had predicted calm, glassy seas and variable winds for the entire day. Bearing this in mind it wasn’t too hard to get motivated and jump out of bed. So with a quick coffee we hit the road and began our three hour journey to the lower part of the East coast. Our destination: Spot X – where there had been some large numbers of boarfish sighted on the weed lines. This summer seemed to have healthy populations across the country with numerous reports of boarfish being speared by the dozen. So our chances were more than certain that we would run into them…

In my spearfishing career, I have speared many prized fish, from giant blue fin tuna to striped marlin and some very big tropical fish. I have always used a speargun however recently James, my dive buddy, introduced me to a pole spear. It’s ironic really; pole-spearing is usually perceived as the starting point for anyone wanting to get into spearfishing – when in fact it is more like the pinnacle of the sport. Using a pole spear hones in on your diving + stalking abilities and sharpens your senses – it adds another dimension to an already challenging sport. In a sense, it takes you back to the roots of what hunting and gathering are or used to be. Just like the earlier civilizations – armed only with a sharpened stick/spear - you feel a great sense of satisfaction bringing home the day’s catch. 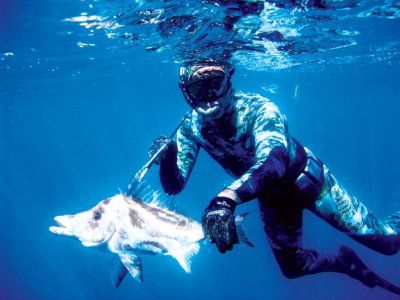 By 9am we were jumping into the beautiful, blue oceanic waters surrounding the islands. Although electric-blue in colour – visibility was not as good as anticipated with it being a maximum of 9-10m, whereas on a good day you could expect 15m. Still, we had glassy, calm seas - so there wasn’t much to complain about. I started working a local weed line around 13m that I knew about from previous trips, and which had always been successful. As I hit the bottom, lying where the sand meets the weed, I scanned the distance to locate the familiar silhouette and shape of the boarfish.

Little did I know that James had descended after me. He was in my blindspot and had actually speared a nice-sized 3-4kg boarfish right behind me. I only found out when I hit the surface for air – just goes to show how quiet and deadly the pole spear can be. So with James having secured his boarie for the day ( we were only after one each) – it was my turn to produce the goods. 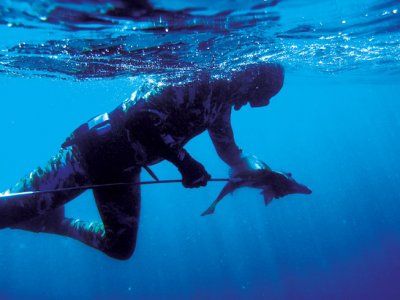 SWOOSH - the quiet but deadly sound just befor the spear hit it - a near perfect shot! Back to the boat and my boarie turned out to be the biggest of the trip weighing in at around 6kg. There's nothing like taking a good fish on a pole spear! I was stoked and the experience of hunting in absolute silence was surreal.

I continued to do a few more drops on the weed line, slowly moving along a couple of metres each time to cover some distance. Then on a deeper drop around 15m – BINGO! I spotted the shape of two boarfish swimming together off the sand towards the weed edge. There was a nice ledge that provided cover for them to sit under, however they were out of range so I made for the surface. On the surface, I swam over so that I was positioned just behind and on top of them; this way I could descend straight onto them in their blindspot and take a shot from above. I find this is the best technique for hunting them, as they are blinded from the light above and unaware of your presence.

I descended, locking them into my sights; there they were – still perched near the ledge, one male and a female. As I got within range I extended the pole and took careful aim while letting myself freefall towards it. SWOOSH – the quiet but deadly sound just before the spear hit it - a near perfect shot! Back to the boat and my boarie turned out to be the biggest of the trip weighing in at around 6kg+.

There’s nothing like taking a good fish on a pole spear! I was stoked and the experience of hunting in absolute silence was surreal. Spot X and my local weed line had produced the goods yet again -  an amazing day, with some great photos too. 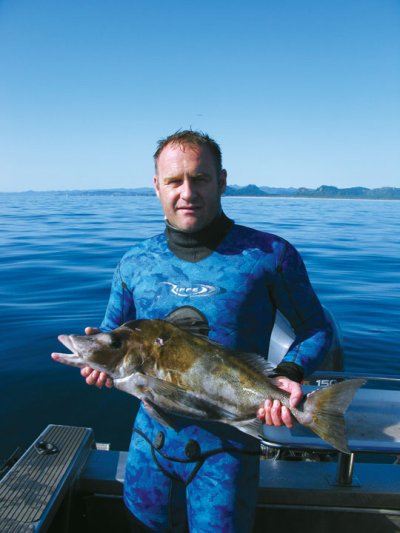