One man’s memorable journey stalking snapper at Great Barrier Island with the Axemen.

After many decades of spearfishing, predominately in Australia, one of the trickiest fish in the sea to spear has finally been added to my resume - the wily snapper.

Although I've lived in NZ for nearly 20 years, most of my spearing is done on trips back to Aussie, due to a lack of local spearo mates. So most of my NZ diving has been hunting crays with other bubble heads. I've speared some big kingies here and various other kiwi staples but never had the opportunity to learn the very different techniques required to hunt snapper. 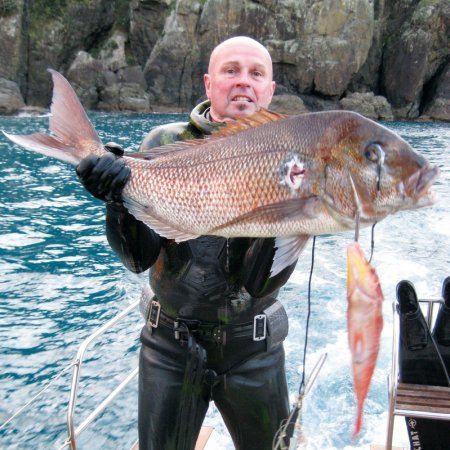 Sam with his first Snapper 7.7kgs, a good palce to start.

When a trip back to Aussie for a week spearing off the Great Barrier Reef was cancelled due to my mate requiring an operation, an email from Mike Smith at Ocean Hunter came at just the right time. The Axemen Spearfishing Club was looking for one more spearo to make up the numbers for a trip to Great Barrier Island - after all, Great Barrier Reef, Great Barrier Island, who cares? Close enough!
After a sloppy trip out with a strong westerly at our backs, we eventually anchored up in a small bay just around the south west side of the island.

Dawn saw a slight swell but otherwise good conditions with reasonable vis, and the westerly still giving us plenty of shelter. Skipper Peter started dropping us off along a likely looking stretch of coast. After a couple of hours of mooching along the bottom, I finally returned to the boat with little to show for my efforts. Hadn't even seen a snapper. Anthony came back to the boat towing something to raise my level of expectation - a mighty fine 7.7kg snapper. Things were starting to look up. Brent soon appeared with his float impressively low in the water too, but this time due to the weight of big crays he was towing. He had stumbled onto an adult’s only party of crays with the smallest being about 1.5 kg and the biggest close to 3kgs. Things were looking up. 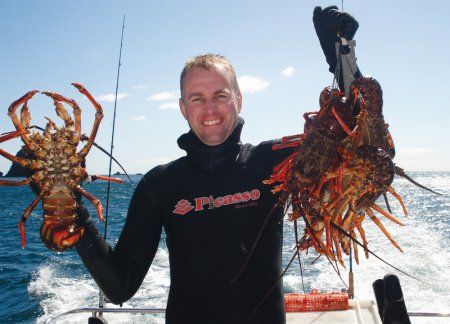 Matt with some crays ranging from 1.5kgs to 3kgs.

A little further north and all back in the water. After another hour or two with little more than a small trevally and a couple of pigfish to show for it, the boat appeared, ready to pick me up. I was just approaching a point with a sloping shelf dropping off into deeper water. Looked promising, so I dived to the bottom a couple of metres down and approached the point. I could almost smell a good fish over the top of the sloping rock when I saw the back of a big snapper that must have been approaching 8 or 9 kgs, and he hadn't seen me. Confident of my first snapper, a stealthy approach was abruptly buggered by a swell picking me up and washing me over the top of the rock. No time to aim, let alone shoot; the fish gave me a quick glance and was gone with a couple of powerful flicks of his tail. A quick swim to the boat and a chance to practise a few well-chosen words that my mother would not be proud of me for using. Anyway, this had certainly got my appetite worked up for a big fish.

Day two dawned and everyone was keen to get wet, so after a hearty breakfast the morning found me undeterred, working along the bottom at about 10 metres, approaching a couple of big boulders resting against each other with a tunnel through to the other side. Again my sixth sense told me that there would be a big fish at the end of the tunnel. As I crept to the end of the tunnel, there he was. Another big snapper of a similar size to the last. This time I had him. Or so I thought. I'm not quite sure how I stuffed it up but I just wasn't quite ready to pull the trigger when he saw me. Good night Irene. He was gone. Third time had to be lucky. 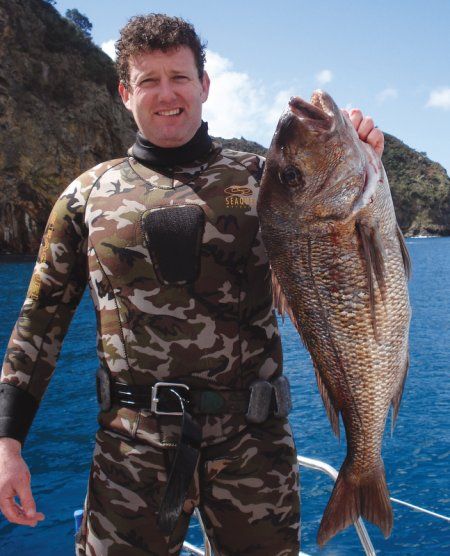 Anthony aka 'Navy Seal' with his 7.7kg snapper

Last dive of the day saw everyone dropped off in a large bay hunting the shoreline. I asked Peter to drop me off at the point and I would head north. It proved to be some great territory with lots of big boulders, both deep and shallow gutters and a reasonable amount of kelp.
I dived into a deep gutter just off the point and out of the gutter swam a nice snapper of about 4kgs, straight towards me. I think he must have been daydreaming because a second later he saw me and was heading back from where he had come from at speed and I'm sure I heard him say "Holy sh_t a spearo! That was close!!!"

Another hour or so of mooching and I approached a gutter running towards the shore from around a large boulder. The water was only about 3 metres deep on the approach to the gutter with the gutter not much more than 6 metres. So down to the bottom, where I commenced my stealthiest approach for the third time. I had a very good feeling I was about to land on a good fish. I approached the boulder and peered around the corner into the gutter, speargun at the ready. There he was. Big and beautiful heading slowly out of the gutter towards me. This time I knew he was mine. I already had him in my sights. The spear caught him slightly low just behind his pectoral fin. It didn't kill him but I knew he wasn't going to get off, so a little careful playing to tire him out and it wasn't long before I had hold of him and was able to ‘iki’ him. First ever snapper bites the dust. Back to the boat and he was almost an identical weight to Anthony's fish. 7.7 kgs. (All right Anthony, yours was a few grams more) My first snapper finally bites the dust. They say little fish are sweet but big fish are sweeter. 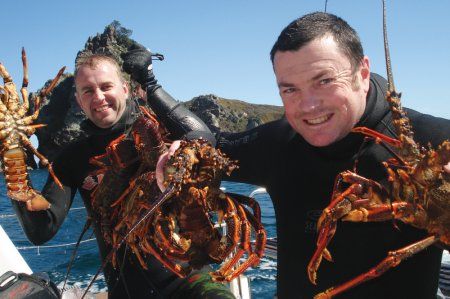 Matt and Brent with their impressive crays

The last day saw me try burleying. Again, totally different to the burleying we do in Aussie. Following Mike Smith’s advice, I first found my ambush point. There was a narrow crack between two rocks heading vertically down to the bottom in about 10 metres of water, just big enough for me to sneak down into. I set up a burley cage with a salmon burley tube on the bottom with a porae with the fillets flayed off the skeleton, attached. I gave the cage a good shake to get some burley into the water and returned to my hide at the top of the rock and started to bomb the area with a few kina. It wasn't long before a peek down the crack revealed a nice pan-sized fish of a couple of kilos with his head down and backside up, munching on the porae. A quick sneak down the crack, and he would soon know my speed spike. Not long after and another nice young snapper was copying the antics of his brother, all the way to my speed spike.

It wasn't long before we had picked up everyone and we were heading back to Gulf Harbour. Everyone had got some reasonable-sized fish and some had excelled on the crays. So with eskys (chilly bins) full, the intrepid hunters returned to their loving wives and children, eagerly awaiting their next leave pass!
Thanks to skipper Peter and all the Axemen. A great bunch of guys and I'm looking forward to more adventures with them in the future.