This is a story about one of those magic afternoon dives when everything just seems to go your way – and even the tax collectors can’t spoil the fun. Is it karma, is it having your spearing mojo on, or is it just plain dumb luck? Who cares - it was a great afternoon out with the boys one way or another.

The scene for our adventure was Little Barrier, which is right in the middle of Auckland’s Hauraki Gulf. Little B is my dive of choice for half dayers. It’s relatively close and has pretty-well every kind of diving in a nice small package – quality weed lines, pinnacles and snooping country. It’s a great place to develop and test your skills across these different NZ spearing disciplines and this was certainly true on this afternoon in late January. About the only thing you can knock Little B on is that at times it can be crawling with bronzie’s – but more on that later.

Off from the Auckland CBD

The crew for the dive were two fellow Axemen, long time buddy Antony  ‘Navy Seal’ Yates and new club member, Anthony  ‘Phantom Menace’ Hafoka. I did the pick-up run round the boys’ offices and off we headed north to launch from Omaha. We had my Ramco 600 Awarua in the water by early afternoon and with pretty good conditions on the water, were on location at spot X by mid afternoon. Game on. 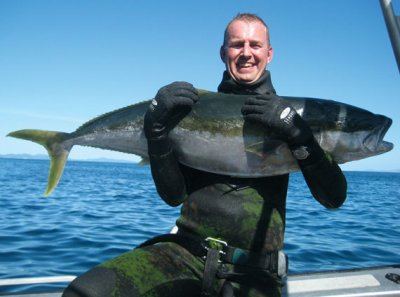 Little B has great weed lines pretty well the whole way around and we decided to start the afternoon on a section Navy had taken some good kingi’s on the previous week. He pointed out he’d been chased around by bronzie’s there but we just couldn’t resist the promise of big fish. Vis was so so at about 8m but conditions were good and we started working along the weed line as a team. We always apply the ‘one down – one up’on weedlines and I find three divers actually gives the optimal time to breathe up on the surface between dives. Importantly, we always make sure the surfacing diver signals ‘OK’ before starting down as divers can black out on the surface. I was armed up with my kingi gun – a 1.2m carbon Rob Allen with Riffe slip-tip and bungy / breakaway rig – and it wasn’t long before it was put to the test.

On weed lines I try to keep constantly scanning between the sand, the weed, and higher up as you never know what kind of fish might appear and where – it’s part of the fun of weed lines. As I looked back up above the weed there was a school of about 5 kingi’s right above me with a nice big one in front. I pulled the gun back and around before quickly extending and firing – I find with these fish you’ve got to react fast and take the shot on the first pass if possible. The slip-tip is pretty forgiving re placement as long as it goes right through, but in this case it was a decent hit below the lateral line anyway. The challenge on a shallow weed line like this is that keeping a decent kingfish out of the weed is nigh on impossible – he went straight into the weed but Navy was on him in a flash with a second shot. I got the whole tangled mess up, iki-ed the fish and got it onto the float and started to try and untangle the big messy ball of bungy and weed

True to form, as soon as the fish floated away from us, an almighty splashing started and Navy yelled “shark!” It was a good size kingi (we all thought it looked 20kg plus) and I thought - Bugger I don’t want to lose that - and swam towards the commotion, spear in hand to chase the shark away. I was sure I was going to see only a head left or half a fish if lucky but no – it was all there. Turns out the shark had chomped the head and not made much of a dent. He was still swimming around us – right under Navy’s fins apparently – so I grabbed the fish and swam straight to the shallows. Menace did the right thing and swam back to get the boat – losing a mighty porae off his float to the shark on the way – and came back to get us. As he is a pretty new spearo I was impressed with how he handled himself around the taxman - he certainly earned himself the repeat invites I have been giving him since. The fish turned out to be a slightly disappointing 17.5 kg – he was in lean condition which is what threw us on the estimate. 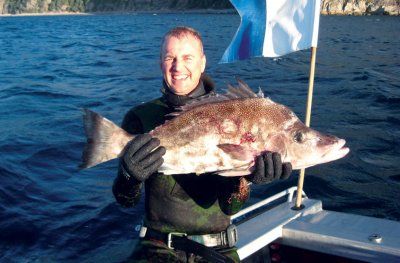 With the first weed line looking pretty sharky, we headed further north to try our luck on another section that had produced the goods in the past. We worked our way north but it was looking pretty quiet. Just when I was about to throw in the towel I saw a decent boarfish heading out over the sand. I finned out cautiously following it – sometimes if you go slowly they’ll pull up and give you a shot, and they are almost always with at least one other fish. True to form an even bigger one came into view, sitting next to a rock on the sand, and while he seemed to be looking at me he was surprisingly calm. I decided not to push my luck and took a long but carefully aimed shot that ended up stoning it. Turns out it was blind in the eye facing me – how’s that for luck! Not taking any chances with the taxman I deposited the 4.8kg fish back on Awarua. 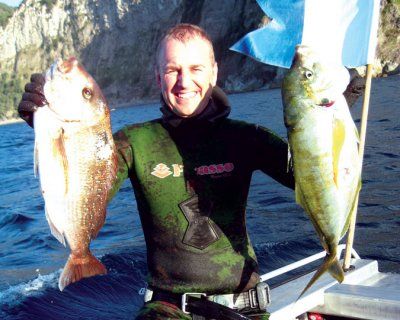 Snapper and Trevally on the snoop

No trip to Little B would be complete without a good snapper snoop so with weed line 2 looking slow we headed towards our favourite snooping haunt at spot Y. I was lucky enough to score a 22 pounder (10kg) there a couple of years ago and Navy took a 15 pounder (6.8kg) there the last time we dived it together in early 08. I switched to my snapper gun which is a deadly accurate 1.2m Effesub. The whole area was disappointingly covered in green cabbage weed, which didn’t bode well, but we pressed on. Snooping, from my experience, is about sticking to the discipline on every possible rock and gut, and no matter how hard it is, you need to keep in your head the thought there is a monster snapper over this next gut/rock on every single dive. Sticking to this thought, I was surprised when a lone humpy head trevally came down a gut for an easy shot. As per usual the trev fought like hell, but I dropped the gun and gave it nothing to pull against and eventually had a nice 3.3kg fish on the float.

Carrying on, the swell was making it hard to snoop (I really hate snooping in swell) but eventually one of the sharp but shallow guts produced a nice 3kg snapper that rounded out a great afternoon with my Axebrothers. I felt bad I’d had all the luck but the guys were great about it. They’re great divers, and were with me at all the same spots, but the luck had gone my way that day. I felt better when I remembered that on other days Navy had had all the luck – see the article in the last NZSPEARO re his recent great day at Great Barrier. Moral of the story – take your lucky days when they come and enjoy every moment!