Spearfishing from the shore

Shore diving is perhaps the most common form of spearfishing. It simply involves entering and exiting the sea from beaches or headlands and hunting around oceans architecture, usually rocks, Kelp and sand. Usually shore divers hunt between 5 and 25 meters deep, though it depends on location. In subtropical areas, sharks are less common, but other challenges face the shore diver, such as entering and exiting the water in the presence of big waves. Headlands are favoured for entry because of their proximity to deeper water, but timing entries and exits is important so the diver does not get pushed onto rocks by waves. Beach entry can be safer, but more difficult due the need to consistently dive through the waves until the surf line is crossed.
Shore dives can produce a mixed bag of fish, mainly rock and kelp fish, but ocean game fish are caught from shore dives to
Shore diving can be done with trigger-less spears such as pole spears but more commonly triggered devices such as spearguns. Speargun setups to catch and store fish include speed rigs and fish stringers on the divers floats and lines.

The use of catch bags worn close to the body is discouraged because the bag can inhibit movement, especially when descending or ascending on deeper dives. Also in waters known to contain sharks, it is dangerous and can greatly increase the risk of a shark attack. The better option is to tow a float behind you and thread your catch on to it as you continue your dive. Tying the float line to the speargun can be of great assistance in the event of a large catch, or if the speargun should be dropped or knocked out of reach. 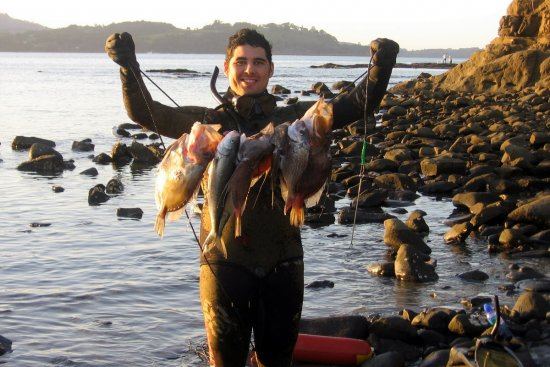 Spearfishing From A Boat

Boats, ships or even kayaks can be used to access off shore reefs and islands or ocean structure such as pinnacles or man-made structures such as Fads (Fish Aggregating Devices). Sometimes a boat is necessary to access a location that is close to shore, but inaccessible by land.

Methods and gear used for diving from a boat diving are similar to shore diving or blue water hunting depending on the prey sought. Care must be taken with spearguns in the cramped confines of a small boat, and it is recommended that spear guns are never loaded on the boat. 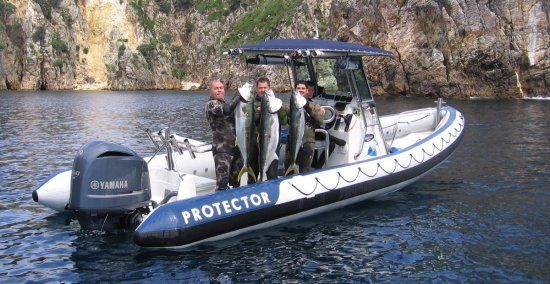 Blue water hunting is the area of most interest to elite spear fishers, but has increased in popularity generally in recent years. It involves accessing usually very deep and clear water and trolling, chumming for large pelagic and game fish species such as marlin, tuna, mahi-mahi, Wahoo or giant Trevally. Blue water hunting is often conducted in drifts; the boat driver will drop one or more divers and allow them to drift in the current for up to several kilometres before collecting them. Blue water hunters can go for hours without seeing any fish, and without any ocean structure or a visible bottom the divers can experience sensory deprivation. It can be difficult to determine the true size of a solitary fish when sighted due to the lack of ocean structure for comparison. One technique to overcome this is to note the size of the fish's eye in relation to its body - large examples of their species will have a relatively smaller eye.

Notably, blue water hunters make use of breakaway rigs and large multi band wooden guns to catch and subdue their prey. If the prey is large and still has fight left after being subdued, a second gun can be used to provide a kill shot at a safe distance from the fish. This is acceptable to IBSRC and IUSA regulations as long as the spear fisher loads it himself in the water.

Blue water hunting is conducted worldwide, but notable hot spots include South Africa (yellow fin tuna) and the South Pacific (dog-tooth snapper). Blue water pioneers like Jack Prodanavich and Hal Lewis of San Diego were some of the first to go after large species of fast moving fish like Tuna. 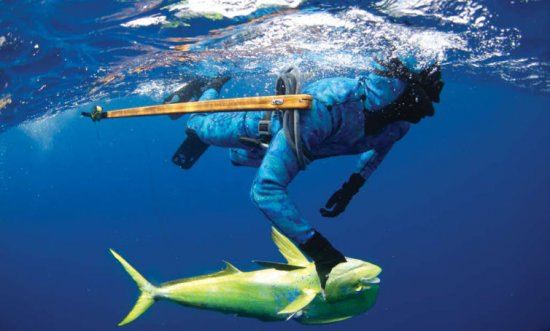