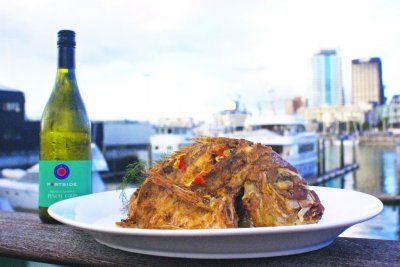 After reading Sam Barnes’ article in the last issue of nzspearo about how much fish we actually waste, and considering that our profile fish for this winter issue is snapper - I thought it very appropriate to take the “full cooked fish” route for this issue’s recipe.
A quick phone call to our head chef Rudy Parlak, ower of Portside on the Viaduct and we were set to go. The great thing about this recipe, is that it doesn’t take much work to prepare all the ingredients. It’s perfect for those days when you’re too lazy or tired to fillet and de-bone the fish. Let’s face it after a hard day in the water – sometimes the last thing we want to do is clean and fillet the days catch. Lucky for you all that is required is to gut and gill the fish. The rest of it is cooked in its entirety.
This may seem daunting to some – but it’s actually far easier than you think. I presume that fewer people have tried this because they’re worried that they won’t pull it off correctly and risk wasting a perfectly good fish. It’s probably easier than battering a fish fillet and frying it – as it works on the same principal, except you’re battering a whole fish. It’s actually safer cooking it this way because there is les risk of you drying out the fish if you overcook it slightly. The great thing about cooking it this way, is that it preserves the soft tenderness of the flesh on the inside - the outer skin protects it from the heat and leaves you with succulent soft white meat that falls off the bone. It’s probably the most delicious snapper dish I have ever tasted!
I have to admit - even I was a bit hesitant at having a whoel fish presented on the table – eye balls and all, but once you see how easily the meat falls off the bone – you get over it. Once you taste all the infused flavours, which the fish has absorbed – you find yourself asking “why haven’t I done this before?” I think we should all be a bit more adventurous with our cooking… you don’t know what you’re missing out on – give it a shot! I guarentee you won’t be disappointed.

1 cup of self-raising flour
1/2 teaspoon of oregano
¼ teaspoon of paprika
Salt & pepper
Mix all ingredients together in a bowl
Rub the flour mix into the slices and all over the snapper to coat it
Leave the fish to absorb the flavour mix while you prepare the sauce.

50g of fresh ginger
2 garlic cloves
Half an onion
1 medium chilli with OR without seeds
1 small tin of coconut cream 100ml
Salt + pepper
½ Teaspoon of curry powder
2 Kaffir lime leaves OR 3 regular lime leaves
1 cup of cream
Tablespoon of maple syrup
1.5 cups of capsicum juice OR white wine OR fresh homemade chicken stock
A stem of lemon grass (use only the bottom quarter)

Pre heat the oven to 200C
Finely dice the ginger, garlic, onion, chilli, lemon grass and lime leaves or blend all the ingredients in a blender
In a saucepan bring the juice to the boil (capsicum juice, white wine OR chicken stock – whichever you have chosen to use)
Add the freshly chopped ingredients
Once the juice begins to evaporate, introduce the cream and coconut cream (Do not allow to boil)
Allow to simmer until a quarter of the liquid has evaporated and the mixture becomes thick and creamy.

While the sauce simmers, cook the snapper and the noodles:

Pour approximately 2cm of oil into a deep pan
Bring oil to the boil
Shallow fry each side of the snapper until golden brown in colour.
Place snapper in oven for max 3 min.
While the snapper is in the oven and the sauce is simmering,
boil the Asian style noodles for 2 min.

Pour the sauce over the fish and noodles.

Complement this magnificent dish with a delicious chilled Portside Pinot Gris from Matakana.