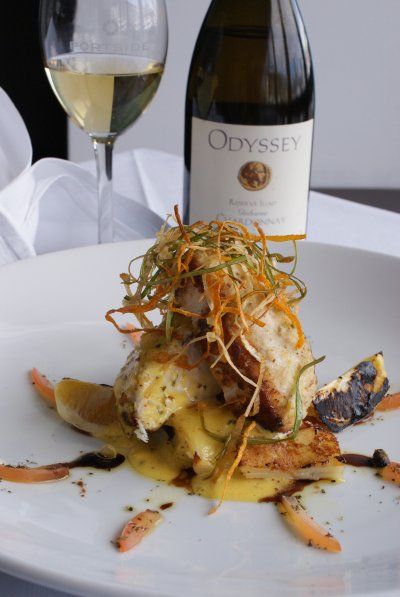 Behind every great fish landed is a great story worth sharing.  What better way to share that tale than to sit around the dinner table with friends and feast on your spoils. Preparation of your trophy fish is a tale unto itself, one which Rudy from Portside, Viaduct Harbour is happy to share. Before you sink your teeth into this mouth watering kingfish dish let us tell its tale.
One late October morning Team Treescape headed out from Omaha for their usual Saturday spearfishing trip. Having shot the first kingfish of the season at The Needles earlier in the morning, the team stopped at a 4 metre rock on the northern side of Wellington Head at Great Barrier Island. Brandon and Shaun were first in the water and spotted some big snapper on the current side of the rock suggesting to Long John he sneak down for a peak. As LJ descended, a school of 25 – 40 kingi’s (number dependant on whom you speak to) swam up to greet them both. Brandon dispatched a respectable 15 kg specimen while Shaun, having never shot a kingfish before lined up the biggest one his eyes could find, took his shot and seeing the shaft enter its gut - raced up for air. He grabbed his line and began pulling. In no time, the fish was underneath him. Struggling to kill it, Shaun grabbed the shaft and the kingfish’s tail, the fish thrashed about taking him for a wee tiki tour before he finally managed to stick it between his legs, whacking it with his knife several times. With the day over, the kingfish was skilfully filleted and given to Rudy for preparation.

Slice 1kg of boneless kingfish fillets against the grain, trying to keep them as chunky as possible. (150g per portion). Season with olive oil, salt and coarse mixed peppercorns. Leave to marinate for at least 15 minutes.

Blend all ingredients until they resemble coarse crumbs.

Place 300g of coconut cream in a pan on low heat and reduce to a thickened jelly. Set aside to cool.

Spread one side of the kingfish with the reduced coconut jelly.

Take the whole piece of fish and dip one side into the crumb mixture.

Heat a pan without any oil until it is hot, place a drop of grape-seed oil in the hot pan placing the kingfish skin side down or flesh side down (not crumbed side). Remove the pan with the kingfish in it and place under a grill until the crumbs are golden (no longer than 2 minutes). Place in a pre-heated oven to 200C bake for 3 minutes.

Serve on top of the potato gratin and top with Portside Hollandaise.

Garnish with kumara or taro crisps.

3 large agria potatoes – peeled and sliced thinly. Season with salt and pepper.
Layer in a shallow ovenproof dish.
Pour 100g cream with a few added sage leaves over the potatoes and  top with grated mozzarella cheese. Bake in the oven at 180 degrees for 30 mins or until potatoes are soft. This can be prepared several days in advance.

With the kingfish ready to be devoured, we sat around a large table at Portside eating up the story and the spoils in front of us!